Worrying trend as Mac Miller found dead at home, suspected to be due to drug overdose

In more sad celebrity health news beloved rapper Mac Miller (government name Malcolm McCormick) was found dead at his home from an apparent drug overdose. Although authorities are still conducting the autopsy and final toxicology reports (which can take weeks to come back) one of the suspected causes is Lean, a drug Mac has previously been addicted to. Although he has fought addiction for years, achieving sobriety at times; his relatively recent breakup with Ariana Grande has been blamed by some as a trigger for him to start using drugs again. In May, the rapper wrecked his G-Wagon by crashing it into a utility pole and was subsequently arrested for DUI and hit and run. He later confessed at his home, reportedly blowing 2 times the legal limit.

While we await the final results of what caused his unfortunate death, his family and loved ones are in our prayers. Hoping to help others avoid a similar fate see below to learn more about Lean, the highly addictive, potentially lethal drink popular in the US after rappers started using it in the 1990s.

“Lean” — also known as sizzurp, syrup, purple drank, and even dubbed “liquid heroin” by some — is a mixture of cough syrup (which contains codeine and an antihistamine) with soft drink and sweets (often a hard candy – i.e. Jolly Rancher). Users then sip the drink throughout the day to get high. Lean is often a purplish color because of the codeine in the liquid. 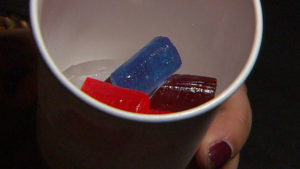 Originally popularized in the 1990s by rappers from the Southwest, in recent years it has exploded geographically with artists such as Lil Wayne and Chris Brown ­featuring Lean in their lyrics. Popular rapper “Future” has multiple songs featuring Lean and was seen drinking from a polystyrene cup in the 2014 video for the track Codeine Crazy. His 2010 mixtape Dirty Sprite (another name for Lean) sold over a million copies.

How does it work?

The primary ingredient in Lean is Codeine. It is considered an opiate and affects the brain the same way other opiates do, changing the way the user experiences pain.Often it is a prescription drug that is used to treat cough and moderate pain. The antihistamine (promethazine) in Lean acts as a sedative at high doses, especially when mixed with codeine.

Thus as the user continues to sip the drink throughout the day they begin to feel highly intoxicated but also euphoric. The slang “Lean” comes from this feeling as users literally have to “lean” on something to keep upright.

The most common effects of drinking Lean are slow or slurred speech, drowsiness, loss of balance and drained, pale-looking skin. Some users have also complained of memory problems. Other common side effects include night terrors, extreme confusion, hallucinations and seizures (famously Lil Wayne was said to have suffered seizures due to his Lean use).

Lean is highly addictive due to the fact that codeine is designed to be used on a short-term basis, so if a person drinks lean regularly, he or she is likely to become physically dependent or addicted. As the person develops a tolerance, he or she may also start to crave a more powerful high, which can lead to the abuse of other opioid drugs like heroin or morphine.

Drinking Lean also has a potential for overdose. An overdose can result in extreme sleepiness, very low blood pressure, respiratory depression, coma or even sudden death. This risk is multiplied if people are also taking other substances or drinking booze at the same time. What makes it especially dangerous is that it’s almost impossible for users to have any idea of the levels of codeine in a batch. Levels can differ widely from one batch to the next. All it takes, however, is one with a fatally high dose to change or end your life forever.

Signs and symptoms of Lean overdose are similar to those of heroin and include: difficulty breathing, cold, clammy skin, blue fingers and lips, loss of consciousness or coma and pinpoint pupils.

Let’s take some time to pray for the family and friends of Mac Miller. May he rest in peace.