Will we see the real life ScareCrow soon (yes we’re talking about the Batman super villain)?

The Scarecrow (Dr. Jonathan Crane) is a fictional supervillain appearing in American comic books published by DC Comics. He originally appeared in World’s Finest Comics #3 (September, 1941). One of the most well known adversaries of Batman – In 2009, the character was ranked as IGN’s 58th Greatest Comic Book Villain of All Time. The Scarecrow was known for being a “Master of Fear” and was commonly depicted as a crazy ex-professor of psychology who exploit the fears and phobias of his victims often through the use of experimental drugs and toxins.

One of his most famous weapons was his invention of fear gas. This caused his victims to experience nightmarish hallucinations. The hallucinations often took shape of the victims’ greatest fears. Batman for example experiences elaborate hallucinations- ranging from finding his parents’ bodies in the Arkham Asylum morgue, reliving his last moments with them as they lived, his shock at finding what seemed to be Gordon’s corpse, and an ‘inversion’ where he is the lunatic who has been brought into Arkham by the Joker. 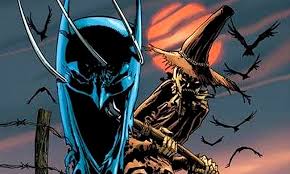 The good news is we’re still far from that reality – the bad news is it seems like we’re getting closer. Recently Stephen Maren, the University Distinguished Professor of psychological and brain sciences at Texas A&M University in College Station, led a team of researchers who found a new area in the brain’s thalamus that controls our response to fear. Although the study was in rodents, the findings may help illuminate the human brain’s response to fear.

To track how rats brains’ reacted to scary scenarios, researchers used c-Fos expression imaging. They found that as rats were continuously exposed to these fear inducing scenarios, they became less afraid and this suppression of fear correlated with increased activity in the rodents’ nucleus reuniens.

Of course researchers didn’t stop here. They then designed chemicals to inhibit signals that project to the nucleus reuniens, essentially turning it off, and making it so that the rodents were unable to suppress fear!

Of course at the current time there doesn’t seem to be any plan for the head researcher to become a comic book super villain. Instead the team is hoping this research can help people with PTSD. Recent estimates show that anywhere from 4-8% of Americans may be suffering from PTSD. Although often associated with veterans returning from war, almost anyone who has experienced at least one traumatic event during their lifetime can develop PTSD symptoms.

While current treatments for PTSD include medication and therapy, they are often non-specific treatments. The hope is that with this new research and helping elucidate specific targets in the brain (such as this region responsible for fear) further advancements and treatments can be made to help PTSD patients cope with this often debilitating condition.