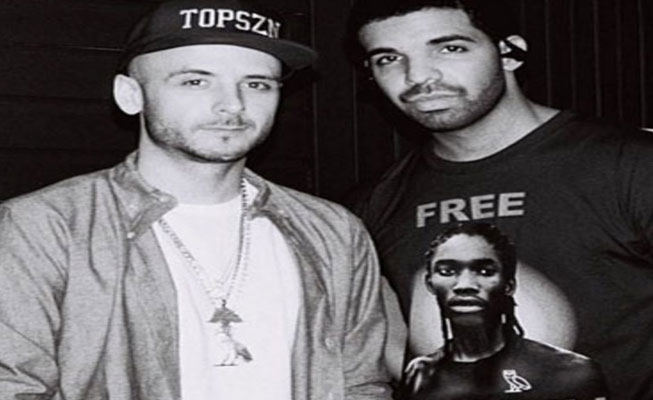 While it’s public knowledge that “40” (government name Noah Shebib) has multiple sclerosis this was recently brought up again in a (our opinion) super flagrant way on a Pusha T diss track.  “The Story of Adidon” — a response to Drake’s diss track “Duppy Freestyle” had one line that particularly stuck out to us at MDLingo – “OVO 40, hunched over like he 80, tick, tick, tick How much time he got? That man is sick, sick, sick.” While it is true MS is a horrible disease and Pusha may have wanted to paint a picture of despair and weakness – this couldn’t be further from the truth. 40 is a successful producer working with Hip Hop’s best-selling performers.

Discussing his disease for the first time publicly in 2012 (he was first diagnosed in 2005) with CNN’s Dr. Sanjay Gupta he talked about some of the daily challenges he experiences. He relayed a story, how that morning for example he couldn’t bend over to put on his own socks, but added that, “the things that I deal with on a daily basis are usually pretty miniscule, so I keep them to myself, but they add up, and it’s hard for people to understand that.”

Despite not being able to at times do simple tasks like tie his own shoes – 40 once again took the high road, responding to Pusha with a simple tweet “Coincidentally… tomorrow is World MS Day. https://worldmsday.org” Fighting hate with love – the point goes to OVO.

Pusha’s lyrics may have been directed at “40” but there are hundreds of thousands of people suffering from this disease in the US, including a few faces you might be familiar with.

Although by no means all inclusive some big names include Jack Osbourne, Jamie-Lynn Sigler and the late Richard Pryor. Jack Osbourne son of British rock star Ozzy Osbourne, publicly announced he has multiple sclerosis in 2012. His motto has become “Adapt and Overcome.” On Twitter He uses the hashtag #Jackshaft to talk about his experience. In an open letter he wrote – “I will never say that I am thankful for MS, but I will say that without MS, I don’t know if I would have made the necessary changes in my life that have changed me for the better.”

Jamie-Lynn the famous daughter of head mobster of the Sopranos was diagnosed with MS in 2002 at just 20 years old, only making the diagnosis public in 2016. Today she is a MS advocate. On Twitter she uses the hashtag #ReimagineMySelf to share her experiences.

Richard Pryor, widely recognized as one of the greatest comedic voices of all time and inspiration to many of today’s famous comedians was first diagnosed with MS in 1986. In 1993,  speaking about the disease he told the New York Times “… I do believe in God and the magic and the mystery of life, it’s like God says: ‘You slow down. So what you walk funny. Take five.’ And that’s what I’m doing.”

So what is multiple sclerosis (MS)?

MS is a disease that impacts over 400,000 Americans and millions worldwide. It wreaks havoc because there is an abnormal response of the body’s immune system against the central nervous system which includes the brain, spinal cord, and optic nerves. This results in inflammation that damages myelin (a fatty substance that surrounds and protects the nerve fibers) as well as the nerve fibers themselves, leading to the symptoms of MS – muscle spasms, vertigo (dizziness), problems with vision, and fatigue. Although there are some treatments they don’t always work and there remains no cure. Much like 40 described – having MS can come with significant daily hurdles.

Although the cause of MS is unknown, it is believed to be triggered by several factors – genetic susceptibility, abnormalities in the immune system, and even environmental factors. For example, MS is known to occur more frequently in areas that are farther from the equator (colder regions). A really interesting study showed that people who were born in a “high risk area” (far from the equator) but then moved to a “low risk area” (closer to the equator) before the age of 15 lowered their risk of developing MS. There is also evidence to suggest that low vitamin D levels may be a risk factor for MS. Sun exposure is a natural source of Vitamin D and may help explain why people who live closer to the equator are at less risk of developing MS.

Other risk factors that may be associated with MS include smoking, obesity in childhood and adolescence, and infections with certain viruses or bacteria such as Mono. Doctors also think there may be a genetic predisposition to MS. If someone in the family has been diagnosed with MS, you have a higher chance of getting it.

Regarding World MS Day – it is officially celebrated every year on May 30th. Different events and campaigns take place throughout the month of May as a way to help bring the global MS community together. The 2018 campaign was called #bringinguscloser and the theme was research. The next World MS Day will take place on Thursday, May 30, 2019.

For more information on MS and how you can donate, visit the official website for the National Multiple Sclerosis Society.