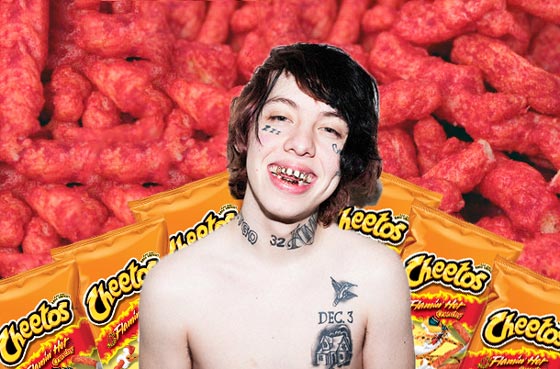 Lil Xan, known as Diego Leanos to his mom, is a rapper from Redlands, California famous for his breakout hit “Betrayed” which was certified platinum by RIAA and brought him much success.

He grew up poor, dropped out of Redlands East Valley High School in his freshman year, and stayed at home working odd jobs like street cleaner and selling drugs. He decided to start a photography career taking pics of some of his friends who were rappers at the time. Story goes, someone stole his camera one day, and instead of using money to buy another camera, Lil Xan decided to invest and start his rap career.

Well the real story is that Lil Xan made the news recently for being hospitalized after supposedly overdosing on spicy Cheetos. That’s right. Cheetos. We broke down what actually happened and why Lil Xan was found coughing up blood after overdoing it with one of my favorite snacks.

The most common things to explain his symptoms include gastritis, stomach ulcers or esophagitis. Below we explain what each of these mean.

Gastritis is inflammation – swelling and redness of the lining that protects your stomach. This can be caused by excessive alcohol drinking, smoking, lots of stress, certain medications known as NSAIDs such as Aspirin, Motrin, Ibuprofen, or even just eating really spicy foods.

How do you know if you have gastritis? A lot of the symptoms are typical of upset stomach including pain, feeling of burning in your stomach or esophagus (heartburn), nausea/vomiting, blood in your vomit or in your stool (poop).

Gastritis can be a serious health condition and should be treated with either antacids like Tums that reduce the stomach acidity , another class of medications known as proton pump inhibitors,  or your doctor may prescribe antibiotics if he thinks your gastritis is caused by a bacteria (H. pylori).

Untreated, this inflammation of the stomach lining over time can lead to really bad serious health problems like stomach ulcers. This means that the inflammation is so severe in one portion of the stomach that that area gets eroded and the lining there gets thinner and thinner (an ulcer) until eventually a hole develops. Another possible serious complication from untreated gastritis is stomach cancer.

Luckily, with the knowledge provided here and learning from Lil Xan’s hospitalization, you can help prevent some of these issues. If you suffer from any of these symptoms it’s a good idea to see your doctor. Prior to the visit a good place to start would be to reduce your alcohol intake, smoking less, or yes – maybe go for the regular cheetos instead of the flamin’ hot.

If you have any questions regarding Lil Xan or gastritis, post in the comments below!