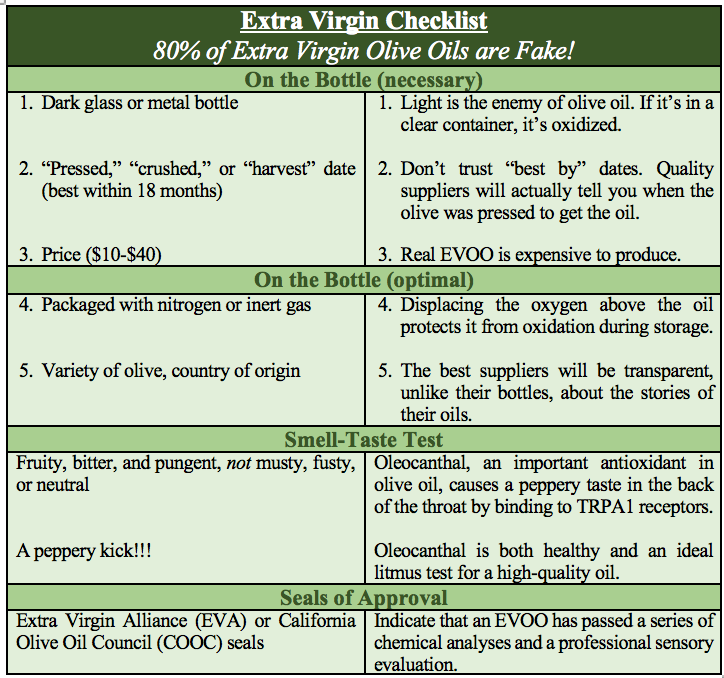 Extra virgin olive oil (EVOO) is among the world’s healthiest fat sources. It’s not only the richest source (83%) of the super fatty acid, oleic acid, but it’s also overflowing with healthy antioxidants and polyphenols. What’s more, its intake is believed to help maintain a healthy weight, reduce oxidative stress and inflammation, and protect against all manner of diseases, from heart disease to diabetes to Alzheimer’s disease. Hippocrates, the father of modern medicine, even wrote that he was able to treat 60 health conditions using EVOO.

The label “extra virgin” is supposed to indicate that the olive oil is of the highest quality. It’s supposed to mean that the olives were picked and then immediately (within hours) cold-pressed in order to retain the antioxidants and polyphenols and in order to prevent the fermentation of the fruit and acidification of its oil. However, most EVOO is a lie!

In a 2007 article for the New Yorker, author Tom Mueller revealed that most EVOO is fake! Countless other sources have since confirmed that, astonishingly, up to 80% of EVOO on the market isn’t extra virgin! Worse, some fake EVOO has been treated with chemicals, solvents, and heat to cover up the rancid taste, or even mixed with filler oils like canola oil! That means, unless you go out of your way to avoid the big brands and actively hunt for the real stuff, you’ve probably been deceived. Since olive oil that is not extra virgin possesses inferior nutritional quality – it’s more likely to be oxidized and has fewer anti-inflammatory polyphenols – this fraud may be negatively impacting your health. No longer…

Looking at the Bottle

The first step in discriminating true quality EVOO from fakes is looking at the bottle. Only buy bottles that are dark glass or metal. This is because the oil gets oxidized by light and plastics can dissolve into the oil itself. So, if you see a bottle that is plastic, or even light glass, leave it and move on.

Just because an EVOO is in the correct container, doesn’t mean it’s the real thing. The second step in finding true EVOO is to look for a “pressed,” “crushed,” or “harvest” date (don’t trust only a “best by” date. Good suppliers will tell you exactly when the olives were pressed to get the oil because they know that olive oil should be consumed within 18 months of being bottled.

The third, and last, easy/necessary step is to look at the price. Real EVOO is expensive to produce; so, you should expect the good stuff to cost in the range of $10 – $40 per bottle. Sorry, but you get what you pay for when it comes to EVOO.

Beyond these three must-take steps, there are several other things to look for:

Fourth, try to find a bottle that is packaged with nitrogen or some inert gas on top of the oil. This packaging technique displaces the oxygen that leads to the gradual oxidization, and decrease in quality, of the oil as it sits in storage.

Fifth, if you can find a bottle that tells you the story of the oil (type of olive, country of origin, etc.) or instructions on how to do a sensory evaluation of olive oil, then you’ve probably found the brand you’re looking for. While you don’t want a transparent bottle, you do want a transparent supplier who is confident enough to share the details about how their product was produced and how you can test it for yourself.

To really determine if an EVOO is truly extra virgin or a fake, check its mobile phone. Whoops! Sorry, I mean, you have to smell and taste it! Start by dispensing about a tablespoon into a ceramic or plastic lid or cup. Swirl it around a bit to get the oil on the walls of the container and increase its surface area. Then cover the lid or cup with your hand and count to 20. This will trap the fragrances. Take a whiff. It should smell fruity and strong. You can’t miss it, especially if you have a big Italian nose like me. Now for the taste. Drink it all up! It should taste fruity, bitter, and pungent, not musty or fusty. Most telling of all, it should have a peppery kick! In fact, top-tier EVOO is sometimes referred to by experts as “two-cough” olive oil because it has such a strong peppery taste that it makes you cough, not once, but twice!

So, what’s with this cough thing? It all comes down to a substance in EVOO called “oleocanthal.” Oleocanthal (“oleo” for olive, “canth” for sting, and “al” referring to its aldehyde chemical structure) is not only a super healthy anti-inflammatory polyphenol (it inhibits pro-inflammatory COX enzymes) found in EVOO, it’s also the ideal litmus test for a good quality oil.

(As cool health asides, oleocanthal may reduce the risk of certain cancers, inflammatory diseases, and brain diseases by reducing inflammation, stabilizing heat shock proteins, and preventing the buildup of amyloid and phospho-tau proteins.)

So, if you really want to know you’re getting super high-quality, super healthy, extra EVOO, search for that peppery kick in the back of your throat!

The above tips and tricks should enable you to find the real thing – true EVOO! But, if you still lack confidence, you can also look for the Extra Virgin Alliance (EVA) or California Olive Oil Council (COOC) seals of approval. Either of these seals indicate that an EVOO has passed a series of chemical analyses and a professional sensory evaluation, i.e. it’s real. Having said that, not all real EVOOs have these seals. Furthermore, these seals don’t allow you to rank the best olive oils among each other. Yep, even among real EVOOs some are more “virgin” than others. So, if you really want the best of the best, you’re going to have to put the oil to the test.

One more thing … let’s say you finally find your real EVOO, a common question that comes up is, can you cook with it? Turns out, the answer is, YES! The smoke point (the temperature at which the quality of an oil is destroyed) of real EVOO is between 215°C or 419°F. That means, as long as you aren’t using your EVOO for deep-frying, it’s perfectly fine to use while cooking, although you may want to keep the temperature below 190°C or 374°F, just to be safe, and reserve the really expensive stuff for a finishing oil.

Olive Oil is the “OG” of Oils. The word “oil” is derived from the Latin word for olive, “oleum”

Olive Diversity. There are >700 different cultivars of domesticated olive plant

Goddess of Wisdom. Athena, the goddess of wisdom, is believed to have given the olive tree to the ancient Greeks, which is how Athens got its name

DAYYM! Olive oil was such a big part of ancient Greek culture that to call someone a “butter eater” was considered a terrible insult

Democracy. The Minoans of Crete based their economy on olive oil trade and were the predecessors of the ancient Greeks, who created democracy

“Cuddle” Hormone. The oleic acid in olive oil is converted into oleoylethanolamide in your gut, a chemical messenger that tells your brain to release the “cuddle” hormone oxytocin