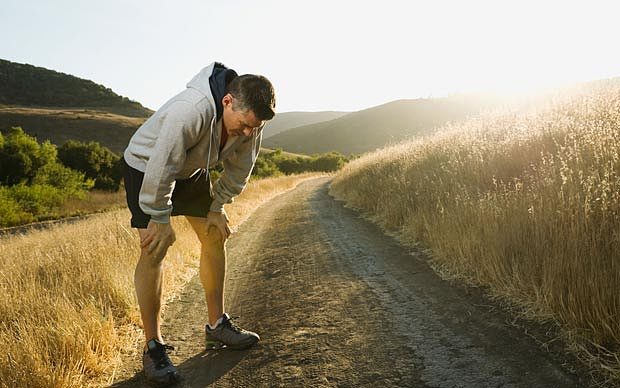 Let me be clear, I’m not writing this as an authority in the field of exercised-induced tummy troubles. I’m writing this as an open-minded semi-skeptic and fellow sufferer. I used to exercise like a crazy person. I ran at least eighty miles per week and lifted weights every day. Sundays were my favorite and involved a twenty-two-mile run followed by ninety minutes of sprints and heavy lifting at the gym. After four years of pushing my body, I had to back off. But it wasn’t because my muscles or joints burnt out; it was because I developed an inflammatory bowel disease, microbial dysbiosis, and irritable bowel syndrome. Whether or not my exercise had anything to do with my gut issues, I can’t say. But, as a scientist, athlete, and patient, I can say two other things: (1) There is a connection between exercise overtraining and gut health, and (2) your gut health is at least as important to your physical health and quality of life as exercise. So, if you’re like me and love to exercise (too much), it may be worth becoming informed about the relationship between exercise and you gut. 3… 2… 1… GO!

Overtraining syndrome is a condition that develops overtime in athletes who push themselves too hard for too long without giving their body adequate time to recover. This can lead to decreased performance, fatigue, mood disorders, sleep disorders, and, in as many as 20-50% of competitive athletes, gut issues. How exactly overtraining can lead to gut issues is still uncertain, but many mechanisms are likely involved. Here are a few:

Exercise is a stressor. Therefore, it activates the stress response. This involves causing the release of epinephrine and cortisol from the adrenal glands. (1a) When these stress hormones are too high for too long, they cause the tight junctions between gut cells to open up, causing “leaky gut.” (1b) Leaky gut allows microbial toxins to enter the bloodstream where they activate an immune response and inflammation. Even more unfortunately, (1c) inflammation itself causes leaky gut by increasing the levels of proteins that cause the further weakening of tight junctions. This means that, by overactivation the stress response, too much exercise can start a vicious cycle. But that’s still only the tip of the iceberg. (1d) Overexercise also causes body temperature to heat up to the point where the gut can experience “thermal damage” that exacerbates leaky gut. (1e) Overexercise also redirects blood flow away from the gut, depriving the gut of oxygen and causing what is known as “gastrointestinal ischemia” and, consequently, the generation of toxic reactive oxygen species that also damage tight junctions and lead to leaky gut. In summary, overtraining can induce three interlocking vicious cycles that lead to leaky gut and gut dysfunction.

Exercise alters the function of the body’s autonomic nervous system. This is the part of the peripheral nervous system that is involuntary and controls things like heart rate and gut function. When you overexercise, (2a) one of the main autonomic nerves, the vagus nerve can release a chemical called norepinephrine into the gut that can stimulate the unfriendly microbes living there to produce “virulence factors,” which are like their weapons. If, or when, these bad bugs proliferate, they can disrupt the delicate balance of your gut microbial ecosystem, causing food intolerances, diarrhea, bloating, constipation, or any other tummy trouble you can think of. What’s more, these bad bugs have direct access to the brain via one main autonomic nerves, the vagus nerve. The vagus nerve is like a telephone line between the gut and the brain, (2b) upon which bad bugs can place a direct call to our neurons that literally changes our neurochemistry, mood, and behavior. That may be, in part, why mood disorders are so common in overtrained athletes.

But the exercise-brain-gut connection doesn’t stop there. The gut is also critical in producing precursors for neurotransmitters, the chemicals our neurons use to communicate. For example, (3a) the gut releases the amino acid tryptophan as a precursor to the feel-good neurotransmitter serotonin, which also happens to be important in gut health. However, (3b) since inflammation and oxidative stress activate the two tryptophan degrading proteins, overexercise can actually deplete tryptophan and lead to the depletion of serotonin in the brain and in the gut! This, in turn, can lead to a depressive-like mood, fatigue, sleep disruption, and, of course, poor gut health!

Not only is the gut a key source of serotonin precursor, it is also a major producer of other neurotransmitters and hormones, including GABA, NPY, and dopamine. The specifics of how these chemicals work in the brain and in the gut isn’t of particular importance for the purposes of this article, especially because I realize I am being long-winded. What is important to understand is that exercise causes these chemicals to be released in the gut and also in the brain, by way of the vagus nerve telephone, and that (4) overexercise may cause your body to run out of, or become insensitive to, these important chemical messengers. Again, the result is the symptoms associated with overtraining: mood disorders, fatigue, and gut troubles.

Even this is not the end. (5) Overexercise can cause excess protein breakdown, increasing ammonia levels, which leads to an upregulation in the ammonia detoxification pathway that competes with synthesis of the hormones and neurochemicals glutamate and GABA. (6) Exercise can also alter the production of certain important metabolites, like short-chain fatty acids, by gut bugs that affect brain function, gut lining, and so on … and on … and on … and on…

The point of all this is not to cram your head with facts and jargon. I could care less what concrete information you take away from this piece. What I really want to impress is that there is such a thing as overtraining and that too much of a good thing can harm your health. Like I said at the beginning, I’m not an authority on this topic, only a sympathetic scientist-athlete-patient who doesn’t want to see others suffer like I have.

“Extremes are easy, the challenge is balance”

“Tend To your Tummy To Thrive”