Type 2 Diabetes is an epidemic. It already affects 30 million, or 1 in 10, Americans; but this statistic underestimates its threat.  Its prevalence is rapidly growing. By 2050, just about every third American is projected to be diabetic. In fact, every other American is already insulin resistant and, therefore, at high risk of developing type 2 diabetes, even if they don’t know it. What’s more, diabetes itself is a risk factor for heart disease, stroke, Alzheimer’s disease, and more worrisome conditions. Bottom line, diabetes is one of the most serious epidemics of our lifetimes and needs to be stopped.

Diabetes is a disease of carbohydrate metabolism. When an individual consumes too many carbohydrates, (particularly refined carbohydrates and sugary foods) over a long period of time, his/her body starts ignoring the hormone insulin. Insulin gets released in response to carbohydrates. This phenomenon is similar to when you might “habituate” to the noise of a fan: The fan comes on and your notice it, but as you keep getting exposed to the stimuli you start to ignore it. It’s a bit different in the body at a cellular level, but you get the idea. Once the body starts ignoring insulin, i.e. it becomes “insulin resistant,” the pancreas starts pumping out more insulin and more insulin until it eventually tires out and starts to die. That’s type 2 diabetes in a nutshell, or, rather, a chocolate egg.

Until recently, common knowledge held that diabetes was a progressive and irreversible disorder for most patients. That opinion is beginning to change with one simple idea: Instead of trying to treat diabetes, a disease of carbohydrate metabolism and high insulin, by telling patients to keep eating carbs and giving them more insulin – this is currently the standard of care – why not try restricting dietary carbohydrates so that blood sugar levels come down and insulin isn’t as needed? Doesn’t that make sense?

Enter a very low-carb diet, also known as a “ketogenic” diet. I won’t get into the nitty-gritty of keto here, but suffice it to say that a ketogenic diet is a surprisingly versatile and delicious lifestyle choice that is gaining in popularity and is particularly well-suited for diabetics. Recently (July 2019), a landmark study was published by the Virta Health Group in the Journal Frontiers in Endocrinology. This awe-inspiring study showed compelling evidence that a well-formulated and medically supervised ketogenic diet reversed diabetes in 54% of 262 patients, as compared to only 5% reversal in the standard of care group!

The paper itself is chock-a-block of more amazing data, but the four key takeaways are these: (1) a ketogenic diet is a sustainable lifestyle option; (2) it is 10 times more effective as the standard of care for reversing diabetes; (3) it is extremely effective at promoting sustained weight loss; and (4) it is excellent for getting diabetic patients off their medications, including insulin.

Unfortunately, the ketogenic option is still poorly understood, and even maligned, by the old guard. This will change. But, for the sake of the human beings suffering from diabetes and its complicates, I sincerely hope that this change comes sooner rather than later.

“Let food be thy medicine” – Hippocrates.

Keto looks different for everyone, but here’s what it looks like for me: 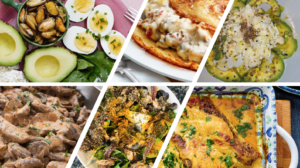