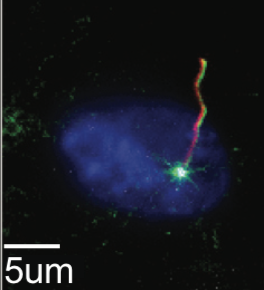 I want you imagine an alien sperm with a long tail that doubles as an antenna, probing and sensing the surrounding environment. As you may have guessed, we have yet to discover aliens, let alone alien sperm. However, scientists at Stanford recently discovered something I, as a nutrition nerd, find almost as exciting and outlandish, something for which it’s useful to keep the image of an alien sperm with an antenna-tail in mind.

These Stanford scientists set out on a mission to look for, not aliens, but any signaling molecules that could be sensed by the antenna-tail, hereafter more properly referred to as the “primary cilium,” of certain stem cells that give rise to mature fat cells in our bodies. The reason they were looking for molecules that interact with the stem cell primary cilium (antenna-tail) is that defects in stem cell primary cilium are known to cause metabolic diseases like obesity and diabetes. Therefore, if medical science can figure out how primary cilium work, maybe we can create treatments to combat these disease epidemics.

Using comically alien sounding “cilia glow mice” – mutant mice with fluorescent stem cell cilia – the Stanford scientists discovered something shocking … the key sensory molecule that was interacting with the stem cells (specifically binding to a receptor called FFAR4) and causing them to replicate was an Omega-3 fat! You’ve probably heard of Omega-3 fats. They are the healthy fats found in seafood and among the top reasons sardines and salmon, rich in the best type of Omega-3 (DHA), are considered superfoods. Interestingly, other fats, like “unhealthy” saturated fat, did not cause the stem cells to replicate.

Wait, what?!? Yes, that’s right… the “healthy” Omega-3 fat caused the fat stem cells to replicate (make more fat stem cells), whereas the “unhealthy” saturated fats did not. Isn’t that counterintuitive? Don’t we want fewer fat cells? Well, not really. You see, fat tissue –  the muffin top, love handles, or double chin that you hate so much – can grow in two ways: (i) you can grow more fat cells (hyperplasia) or (ii) the existing fat cells can get bigger (hyperplasty). Since excessive hyperplasty is associated with metabolic diseases like obesity and diabetes, it’s much healthier to have many small fat cells than fewer big ones. 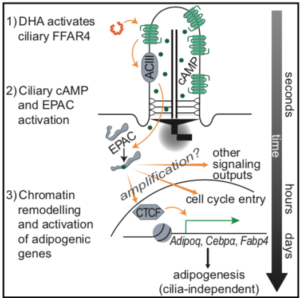 Here’s the big picture in three sentences: Stem cells in our fat have antennae-like projections that (use FFAR4) to sense Omega-3 fat (DHA; the kind of fat you find in seafood) in the blood. When Omega-3 fat is present, the stem cells are stimulated to divide, rather than to grow bigger. This metabolic shift, to more division and less growth, is healthy and can help combat metabolic diseases like obesity and diabetes.

It’s a mind-blowing discovery for nutrition nerds like myself, one that starts to bridge the gap between our dietary choices and hard-core cell metabolism. But it’s only the beginning of our expedition. Big questions remain: How does Omega-3 fat affect mature fat cells differently than fat stem cells (there are reasons to think that; if you read the paper, see the right column of page 14). How do other types of fats, like Omega-6 fats, monounsaturated fats, and saturated fats affect fat stem cells and mature fat cells? How do these signaling pathways interact with carbohydrate-insulin signaling or protein-mTOR signaling? The list goes on forever… just like space.